Did the Pepsi ad leave a bad taste? - K2L Marketing

Did the Pepsi ad leave a bad taste?

‘Clearly, we missed the mark.’ That was part of the statement Pepsi made yesterday after pulling latest and highly controversial TV advert on Wednesday after a mere 24 hours.

In case you’ve been off the grid and haven’t seen the online uproar Pepsi’s latest advertisement has caused, let us fill you in.

The TV advert shows Kendall Jenner, one of the enduringly controversial Kardashian clan, leaving a glamourous photoshoot to join a protest with obvious parallels to the Black Lives Matter movement. The model and reality TV star, armed only with a smile and a can of Pepsi, seemingly morphs into a peacemaker, leader and the voice of a generation. But that’s not all.

At one time, it seemed that Pepsi had a knack for hitting the mark with enticing advertising. Michael Jackson, David Beckham and the Spice girls were all involved in fun adverts for Pepsi which worked a lot better than this current attempt.

More recently, One Direction and Drew Brees (a famed American Football player) faced off in a light-hearted popularity contest. The advert encouraged consumers to ‘live while their young’ and chase their dreams. The tone and, please forgive us, direction of the video seemed to fit the Pepsi brand.

Pepsi’s latest brand advert, however, has been accused of being comically innocuous with vague and muddled messages, choregraphed dance moves, smiling faces, peace signs and bottles of Pepsi – all led by a 21-year old model. It’s safe to assume that public response has been underwhelming to say the least.

The theme of the advert appears to be unity, but execution is, well misconceived. Even unity achieved by a soft-drink, can be easily portrayed without having to reference social justice.

The implication seems to be that a Pepsi can radically effect social injustice for the better. This is particularly hard to swallow – especially for anyone affected by the spate of crimes that prompted the Black Lives Movement.

Public reaction to the advert was perhaps best summed up by Larry Chiagouris, marketing professor at Pace University, New York, who said that ‘Pepsi’s message of unity comes across as exploitive.’ The online community has taken to social media to vent their frustrations with many ridiculing the ad and brand for belittling the anti-violence protests and movements of recent history. 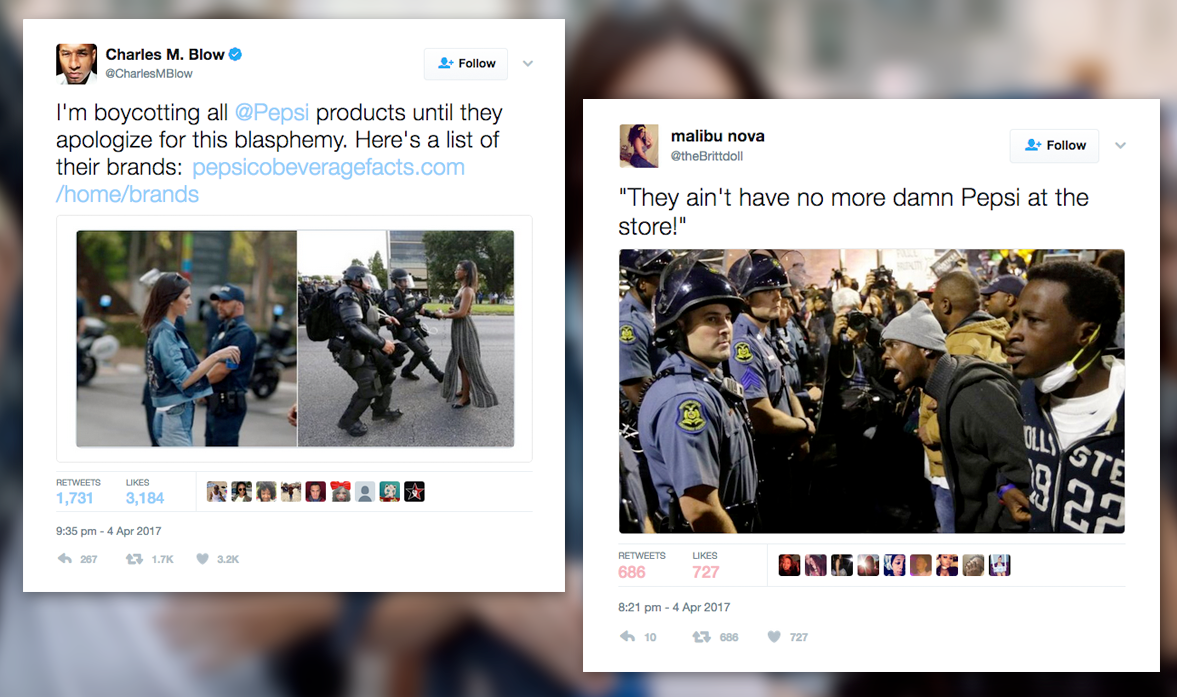 Pepsi aren’t the only big name brand to fall miss the mark with a national advertising campaign. Skincare giant, Nivea, has recently been forced to apologise for promoting a ‘white is purity’ image of women.

Both the recent Pepsi and Nivea adverts beg the question of whether each was audience-tested prior to be rolled out? And, if so, what was the feedback?

Pepsi’s immediate acknowledgement that their latest advert has missed the mark means that their marketing department may have to get back into the boardroom and start brainstorming again.

What do you think about Pepsi’s pulled advert? Is everyone in an uproar over nothing, or is the advert blatantly insensitive?