Scott Disick Makes Di*k of Sponsored Insta Post – Or Does He?

Scott Disick Makes Di*k of Sponsored Insta Post – Or Does He?

Scott Disick had ONE job. And now the internet’s in uproar. Yesterday, the once Keeping Up with The Kardashians star (extra?) earned himself the title of ‘Instagram incapable’ – after botching a sponsored post, paid for by UK-based fitness brand Bootea.

The self-proclaimed ‘Lord of Instagram’ mistakenly revealed his very specific instructions on how to promote the Bootea Shake to his 16m followers. The quickly deleted post featured an image of Disick, posing with the product, with a caption that read:

‘Here you go, at 4pm est, write the below: ‘Keeping up the summer workout routine with my morning @booteauk protein shake!’ 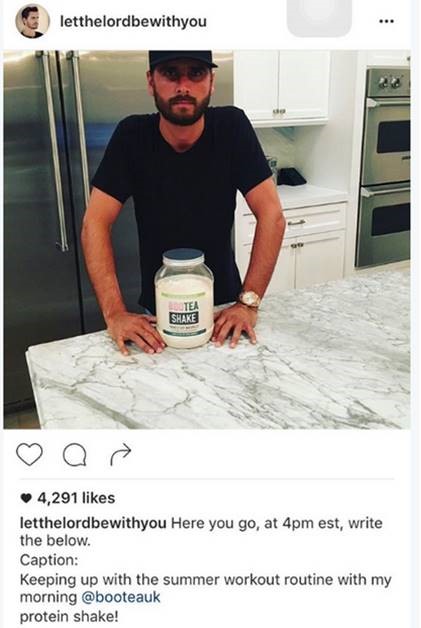 Honestly, you couldn’t write it if you tried. Clearly – and Disick proved it, as he didn’t try to write anything at all, but rather executed a copy-and-paste fail of epic proportion.

The bungled post was swiftly removed. But alas, in true internet form, the marketing faux pas had already been immortalised in the form of a screenshot… And swiftly shared around the world.

News Outlets Unite… To Let Out a Collective LOL

As always, the Twitter brigade enjoyed a good chortle, chortle but this one’s gone a few steps further. International news outlets including the Daily Mail, the Mirror, Buzzfeed, Huff Post, Cosmopolitan and GQ are all crowding round to have a gander and a giggle at this perfectly public celeb slip-up.

Do we feel a bit sorry for him? No – and we’ll let you be the judge of why. In the meantime, let’s talk sponsored posts.

Scroll up and down your Instagram feed and in amongst the inky pink sunsets and symmetrical breakfasts, you’re sure to spot a number of sponsored or paid-for promotional posts.

Look for toned, lean beautiful bodies touting everything from fake tans and tooth-whitening, to protein and weight-loss products. These days even the cute dog in the teacup is probably pushing Cath Kidston saucers of some sort.

Sponsored posts are sneaky little blighters – at least they were until Mr. Disick decided to try his hand at one – but here’s the general gist. A company will pay a celebrity with a large social media following to post a pic of their product, along with a snazzy, inspiring caption.

They’re generally encouraged to be as ‘natural’ as possible, although legally the posts should be made identifiable, with hashtags such as #spon and #ad. Particularly when they’re paid for, which in nearly all cases they all.

Now, we say ‘legally in such a way, because this new Instagram-Twitter publicity paradigm has opened up a rather grey area in marketing.

Celebrity endorsements have been around for donkeys – they’re nothing new, and don’t we all know it. We also know that Davina doesn’t home-dye her own hair with colour from a box, but the millions in her bank account (or rather the people that put them there) would certainly have us think otherwise. We don’t know what her (very expensive) hairdresser thinks, but…

The point is, nobody dissed Davina.

Although there were several raised eyebrows, that tends to be the territory with celebrity endorsements. Footballers don’t drink Pepsi. And does anyone remember when Ronaldo tried to tell us that he loved nothing more than tucking into an entire bucket of fried chicken? Nice try KFC.

How to Have Followers and Influence People

‘Influencer marketing’ as it’s known in the biz, is being touted as the quickest, most effective way to reach, engage and influence your target audience. And like all quick fixes, everybody loves it… Everybody in marketing that is.

But what about the followers that are being ‘influenced’?

Celebrities who endorse on their social channels tend to get a fair bit of stick for posting their phoney photos. Names like ‘brand ambassador’ or ‘creative consultant’ get bandied about, definitely adding fuel to the fire. Mostly, it’s the casual, seamless way these adverts make their way into our feeds that tends to irk people.

But generally, Instagram users don’t really seem to mind these sponsored posts – they’re commonplace now, and people tend to take them with a pinch of salt.

These days, we’re an informed audience. We’re well aware that, although Katie Price’s protein shake has been posted between some candid pics of kids and horses, that product might not actually be a part of her ‘perfect’ daily life. Especially with the little #spon that’s appeared at the bottom.

But Where Does That Leave Bootea?

What about Bootea’s role in all of this? On the surface, it’s embarrassing. They paid him, he made a pig’s ear of it, and now everyone’s laughing. But they’re definitely laughing at Scott, not the brand. And paid posts are so widely accepted now, they’re not even mad. Some are even wondering if Bootea should ask for their bucks back.

If anything, Bootea have probably been left a little red-faced from all the unwanted attention on the inner-workings of their online marketing strategy.

But hold on. Unwanted attention? In marketing? We don’t think so.

As the old adage goes, no publicity is bad publicity. And thanks to Disick’s dumb move, it’ll be Bootea that are reaping the benefits.

It’s clear that the use of paid posts as a marketing tool isn’t going anywhere soon – even more so when there’s a queue of Z-list ‘slebs, lining up out the door to promote. And there will be, when all they need to do is click upload and cash a $20k cheque.

With advertising, you’re not selling the lifestyle – so who cares if it’s fake?

The whole point is to get your brand name out there, and then you’ll sell more products. So today, thanks to Disick, Bootea will probably be laughing all the way to the bank.