We’ve never heard that one before either, but it’s clearly what the ‘lads’ at Sprite have learnt over the years.

For Sprite is the latest entry on the long list of brands to land themselves in hot water; furiously backtracking after accusations of misogyny in their latest marketing campaign.

Banner ads appeared on Irish website JOE, touting Sprite’s #BrutallyRefreshing campaign. Slogans such as “A 2 at 10 is a 10 at 2!” and “She’s seen more ceilings than Michelangelo” were splashed across the page, and soon met with a stinging reaction from – you guessed it – Twitter users.

Now, here’s the backstory. The #BrutallyRefreshing campaign was launched in Ireland earlier this year, targeting a ‘mainly male’ audience and said to be “celebrating those with guts, who tell it like it is”.

The campaign intended to out some of life’s uncomfortable truths between friends. However, it’s safe to say the assumedly light-hearted nature of the creative seems to have been lost in translation… 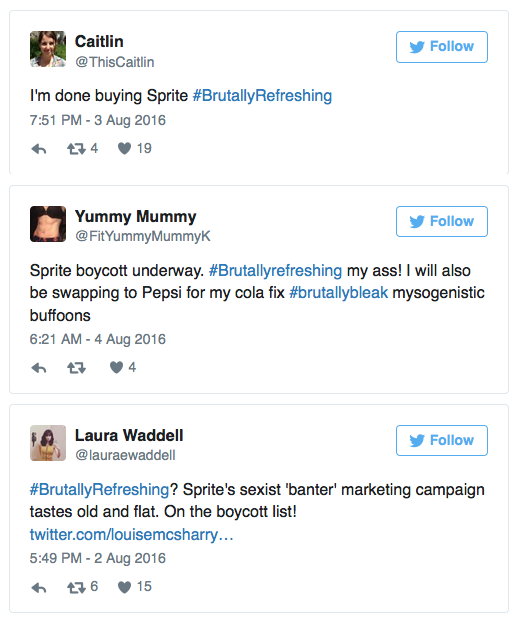 Sprite: ‘Quick! Fill Out The Template and Release The Apology!’

Owners of Sprite, Coca-Cola, were (sadly) quick to apologise. They released a statement:

“We’re sorry for any offence caused by the #BrutallyRefreshing Sprite campaign in Ireland, which was intended to provide an edgy but humorous take on a range of situations.

“Since its introduction in Ireland, Sprite has been associated with individuality and self-expression and we have always been committed to ensuring we deliver the highest standard of advertising.

“We recognise that on this particular occasion the content did not meet this standard and we apologise. The campaign has now come to an end and the advert in question will not appear again.”

Researching the original campaign, it was not inherently sexist.

Slogans included ‘Everyone has a tight friend* *If you don’t, well… This is awkward’ and ‘You are what you eat. Funny, I don’t remember eating a sexy beast’. While these mottos might have seemed a little sly and somewhat confusing, they’re clearly tongue-in-cheek and in jest.

Yes, Sprite may have sprawled down the slippery slope into sexism (starting with ‘Once a cat lady, always a cat lady’?) with some of the slogans. It was probably an unfortunate choice that the most demeaning of the lot were collated and rolled out on JOE in a visually assaulting homepage takeover.

The question here is not whether or not this campaign was sexist (head over to Twitter if you fancy that debate) but rather, was it deliberate? Did Sprite know full well what they were doing, to splash their brand all over the headlines? And if so, why then apologise?

While terms such as ‘brand boycott’ get bandied about a lot, public outcry on Twitter generally means lots of worldwide press coverage. And the old adage goes, all publicity is good publicity – and in the wake of many similar campaigns, this appears to be the approach that Sprite have taken.

And, as we’ve seen before, such exposure does tend to yield success. No matter how ‘outraged’ some members of the public feel, there will always be a demographic that simply doesn’t care and does happen to love your product, regardless. Protein World, anyone?

Yawn, yet another brand apology…

The real shame here is Sprite’s unreserved, almost grovelling apology. What would have been truly refreshing would be if Sprite had supported the judgement of their marketing team.

Because if you’re going to do it, at least have the balls to back it up.

Let’s face it, the concept would have passed through the hands of many a marketer; it would have been approved and okayed, from creative through to senior-level sign off. This is not some gaffe from an intern who hopes to write for The Lad Bible.

It’s a strategic, national campaign, crafted by seasoned marketing professionals. Is it lazy? Maybe. Is it offensive? Probably. Will it damage the Sprite brand beyond recognition? Probably not. And that’s the reason behind it all. Plus, the worldwide press coverage, of course.

Shock-factor tactics, like including sexist remarks in your marketing campaigns, are not refreshing – marketers have been doing it for years. So what’s all the hullabaloo? And how do you actually pull it off? 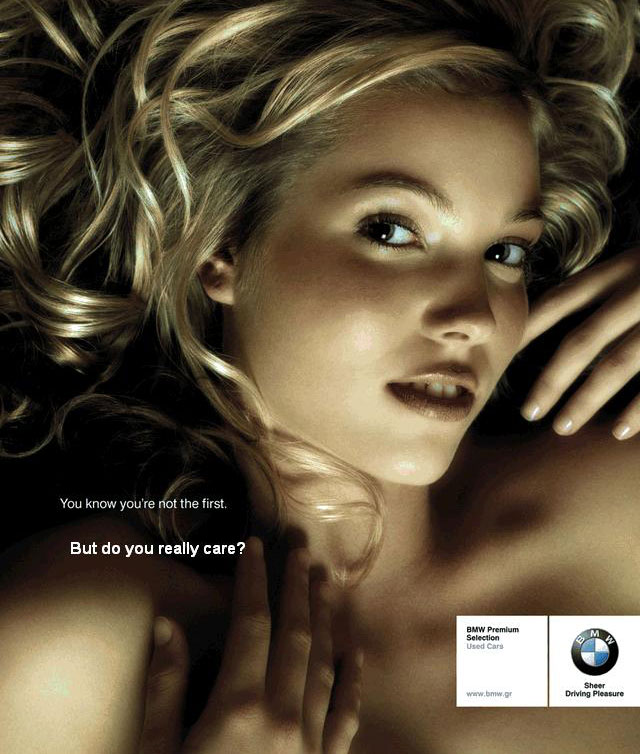 Maybe it’s a case of choosing your target audience wisely – but it’s far more likely that Twitter, as a platform, is now just a place for public outcry. So be prepared to p*** people off if you’re planning to play the ‘banter’ card with your campaigns.

And if you’re going to do it, stand by it. Forget about a backpedaling apology – hold your hands up and say yes, we did it, and if you don’t like it, close your browser. It took balls to include the word balls in this post, but I did it anyway, and no – I’m not going to apologise.

So for all you spineless execs at Sprite, take note; when teams of marketers start to stand up for their furor-inducing, failed campaigns – that’s what’ll be #BrutallyRefreshing.