A New Social Media App Lets Us Rate Each Other, But People Aren’t Happy About It - K2L Marketing

A New Social Media App Lets Us Rate Each Other, But People Aren’t Happy About It

Social media users were in uproar yesterday over the announcement of a new app called Peeple, which is being described as ‘Yelp for people’. The app allows users to rate people they know from 1 to 5, like a restaurant or product review.

Although the developers’ intentions seem to be positive, with the benefits of the app listed as allowing users “to better choose who we hire, do business with, date, become our neighbours, roommates, landlords/tenants, and teach our children”, Twitter users weren’t happy due to the implications of the app being used as yet another tool for cyber bullying and the fact that Peeple effectively reduces human beings to a number.

In typical internet fashion, it wasn’t long before the Peeple Facebook page was inundated with comments from people airing their distaste for the as-yet-unreleased app. Funnily enough, Peeple’s CEO Julia Cordray then posted on Facebook asking how to prevent people from commenting on their page. It seemed the creator of an app that lets people give unsolicited reviews of people, didn’t like the fact that people were giving unsolicited reviews of her company (although the irony of this seemed to be lost on her). 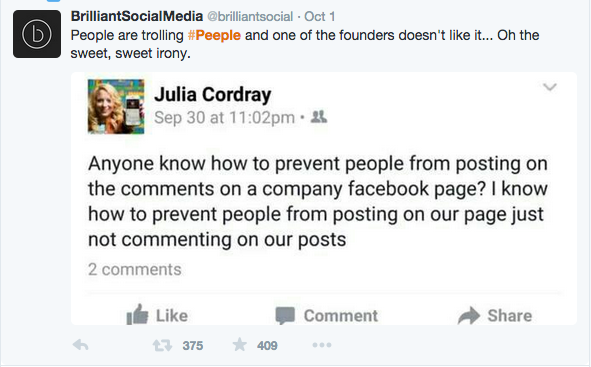 A parody account of Peeple’s official page @Peepleforpeople called @peopleforpeeple was also created, which openly mocked the apps creators. Peeple released a message insisting that they had contacted Twitter to have the parody account removed. Again, Peeple’s creators didn’t seem to grasp the irony in the fact that their app allows users to create accounts on behalf of other people and yet they complained when someone did it to them.

Many were also quick to point out the similarity between the Peeple app and a fictional app called “MeowMeowBeenz,” which featured in an episode of the hit US sitcom Community. In the episode, the students at Greendale Community collage are asked to Beta test an app that, just like Peeple, allows users to rate each other from 1-5. Before long, the situation descends into a dystopian nightmare, with everyone reduced to numbers, and the 4s ruling over the 2s and 3s, and the 1s being shunned as pariahs. 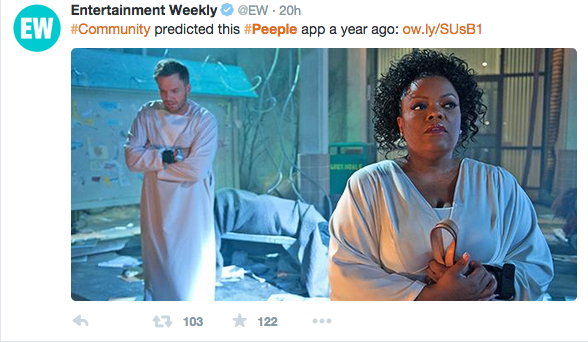 Although there was humour in this situation, many took the development of a real life “MeowMeowBeenz” much more seriously, speculating that the app could result in an increase in cyber bullying and even suicide rates.

Corday defended herself by stating that all negative reviews would be vetted and released figures from Yelp that suggest that the majority (up to 75%) of reviews left by users are positive. Maybe her optimistic view of the human race is commendable, or maybe she is just being naïve, but many rebutted her claims by sharing their own experiences of cyber bullying. And, as one Twitter user pointed out; “restaurants don’t have feelings. People do.”

One of the beautiful yet dangerous aspects of social media is that it lets businesses know exactly what the public think of them. Businesses need this feedback as it allows them to adapt and grow. With reviews being in the public domain it lets other potential customers know whether a product or service is worth spending hard earned cash on.

As an integrated marketing agency responsible for social media management for a number of our clients, Twitter and Facebook are extremely useful for us to gain valuable insights into our clients’ target markets.

But is there any need for a review system for human beings? Social media has already proven itself as a breeding ground for ‘trolls’ – people who like nothing more than to abuse people from the anonymity of their keyboards. Won’t Peeple just be another tool in the arsenal of the trolls? As another Twitter user put it “the only kind of people who would want to “rate” other people are the exact people who shouldn’t be able to.

If Peeple’s creators do use the feedback they have received, should the app ever see the light of day, it may be a very different app to the one they originally proposed.

What are your thoughts? Tweet us at @K2LMarketing and let us know.